Metro Manila Subway Project (MMSP) involves the construction of a 36km-long subway in Metro Manila, Philippines. It will be the first mass underground transport system in the Philippines.

The subway will connect North Caloocan in Bulacan and Dasmariñas in Cavite through the National Capital Region.

The project was proposed by the Department of Transportation or DOTr and approved by the National Economic Development Authority’s Investment Coordination Committee (NEDA-ICC).

Ground-breaking for the Manila subway project was held in Valenzuela City in February 2019. Partial operations will begin by 2022, while phase one is expected to be completed by 2025.

The Katipunan route was shortlisted among three proposed routes. The line will run from Quirino Highway in Quezon City to NAIA Terminal 3 in Pasay and FTI in Taguig.

Spanning across Valenzuela (the depot), Quezon, Pasig, Makati, Taguig, and a small portion of Parañaque City, the subway system has a maximum operational speed of 80km/h and will run through seven local governments and three business districts in 30 minutes. 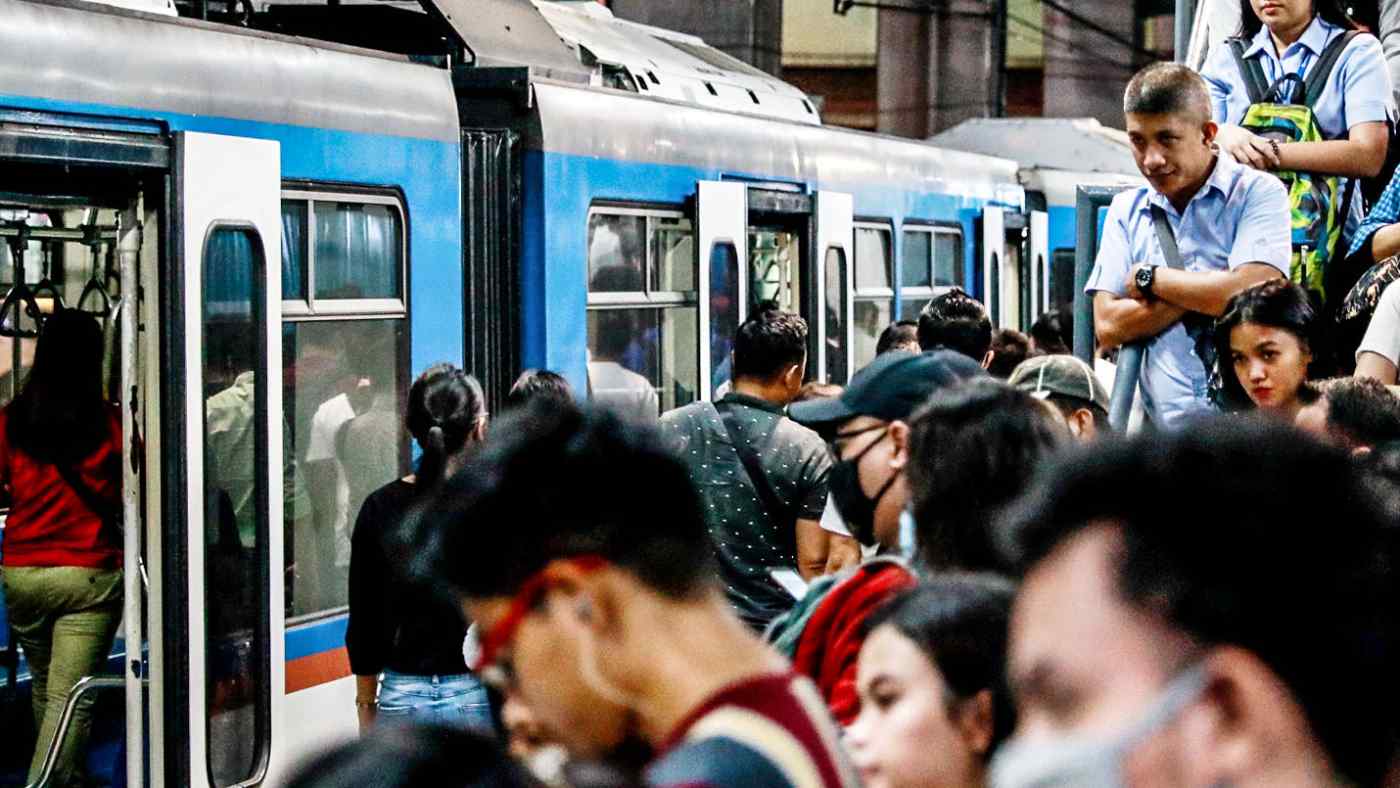 Sumitomo and JR East subsidiary Japan Transport Engineering signed the contract on Dec. 15, according to the news release. The order covers 240 subway cars, with the final delivery date set for March 2027.

The subway will span 36 km and 17 stations in the Greater Manila region. The line will connect Quezon City in the north to the city of Paranaque in the south.

The subway project is the centerpiece of the “Build, Build, Build” infrastructure initiative being led by President Rodrigo Duterte’s government. The Japanese government is providing foreign development assistance for the undertaking.

The contract comes on the heels of last year’s order for 104 cars that will run on a north-south commuter railway serving Manila. The line is expected to fully open in 2025. 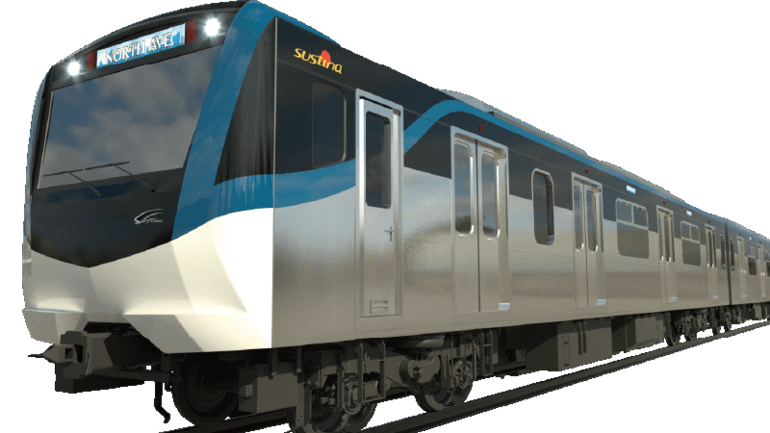 A rendering of the Japanese-made subway cars to be supplied to Manila.

Japan Transport Engineering is making both the subway and commuter cars, which will be similar. The company owns the largest share in Japan’s commuter-rail-car market.

The Metro Manila Subway, formerly known as the Mega Manila Subway (MMS), is an under-construction underground rapid transit line in Metro Manila, Philippines. The 36-kilometer (22 mi) line, which will run north–south between Quezon City, Pasig, Makati, Taguig, and Pasay, consists of 15 stations between the Quirino Highway and FTI stations. It will become the country’s second direct airport rail link after the North–South Commuter Railway, with a branch line to Ninoy Aquino International Airport.

Dubbed as the “Project of the Century” in the country, the subway line’s groundbreaking took place on February 27, 2019, and construction began the following December. It will be partially opened in 2022 and fully operational by 2026. Expected to cost ₱227 billion (equivalent to US$4.5 billion in 2017 dollars), the line is the most expensive transportation project undertaken by the Duterte administration. Much of its cost is covered by a loan provided by the Japan International Cooperation Agency (JICA); the first part of a ¥104.5-billion loan was signed in March 2018. Metro Manila Subway!

The Metro Manila Subway is designed to connect with other urban rail transit services in the region. Riders may transfer to LRT Line 1, MRT Line 3, and MRT Line 7 at the North Avenue Common station, which is also currently under construction. Other connections include the existing LRT Line 2 and PNR Metro Commuter Line, as well as the planned Makati Intra-city Subway, the MRT Line 4, and MRT Line 8.

As of December 2017, 178 cities in 56 countries around the world use approximately 180 metro systems. Almost all of them incorporate both underground and aboveground railways—like the Philippines’s light rail systems—in their metro transportation network.

However, underground transportation is standard across the globe. Line 1 of the Seoul Metropolitan Subway opened in 1974 and is considered one of the best with the highest number of passengers at nearly 3 billion riders per year. The Shanghai Metro is the longest, with 743 kilometers of track. New York City’s has the most stations.

Underground subways are operating in Dubai, Kazakhstan, Algeria, Romania, Venezuela, and even in North Korea.

The concept of an underground subway system for Metro Manila was first proposed in 1973 by the forerunner of the current Japan International Cooperation Agency. In 1995, Bonifacio Land Development Corporation, a consortium led by Metro Pacific Investments Corp, made a successful bid to become the Bases Conversion and Development Authority partner in the development of Bonifacio Global City (BGC), the former Fort Andres Bonifacio, site of the headquarters of the Philippine Army.

After the conversion of the base for private use and ownership, another proposal was made to build a subway from Bulacan through BGC and to Bacoor. The change of ownership of BGC and the 1997 Asian Financial Crisis saw that plan shelved.

In November 2017, a loan agreement was signed between President Duterte and Japanese Prime Minister Shinzō Abe for the subway, dependent on approval by government authorities. By March 2018, Japan signed the loan and in November 2018 a Japanese consortium and Metro Development Co. Ltd. got the P11 billion contract to build the line. Early in 2019, a Japanese-Filipino consortium, including EEI Corporation, won the design-and-build contract for the first three stations.

Ignore for a moment the economic benefits that will accrue from this new transportation system. Let’s consider it only as a convenience or even a luxury for Manileños. The reality is that “the country’s first subway system will be financed via Japanese Official Development Assistance, with an interest of 0.10 percent per annum, payable in 40 years, inclusive of a grace period of 12 years.” The total cost of that loan over 40 years is less than 3 percent.

But there is a risk, a potentially great risk.

The reality is that both internal and external players have taken advantage of Filipinos since time immemorial. We have seen our money squandered, stolen, and put to useless purposes, the iconic “Bridge to Nowhere.” We have seen projects that started out with promise turn into a nightmare in a few short years. The Manila light-rail projects have haunted our dreams for decades.

This has been a continuing problem of “government” and not of any particular presidential administration.

The Metro Manila Subway is a game changer. It is highly visible, costly, and could be an exceptionally positive transportation system development for the NCR. Now, it is up to the government to prove itself to the people. Metro Manila Subway.